Judges and magistrates are generally not subject to direct discipline by other persons. This degree of immunity from direct discipline except in extreme cases is necessary to maintain the independence of the judiciary so that they can, and can be seen to, administer justice impartially.

At the same time, judicial officers are made accountable generally through:

There may be occasions, however, where a person is concerned not with the decision made, but with the conduct of a judge or magistrate. 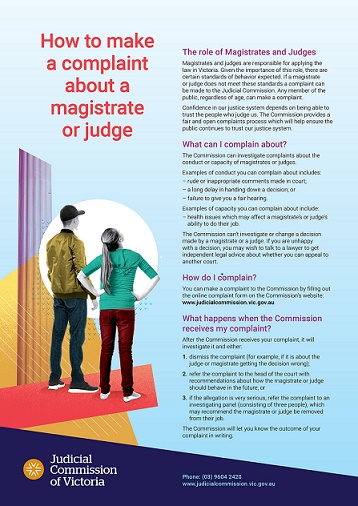 Who can make a complaint to the Commission?

A member of the public or the legal profession can make a complaint by filling out the online complaint form available from the Commission’s website. The Law Institute of Victoria and Bar Association can also refer complaints on behalf of their members without disclosing the identity of the complainant.

Which judicial officers can I complain about?

The Commission can investigate complaints about the following judicial officers and VCAT members:

What type of complaints can the Commission investigate?

The Commission can investigate complaints about the conduct or capacity of magistrates or judges.

Examples of conduct you can complain about includes:

Examples of capacity you can complain about include:

The Commission can't investigate or change a decision made by a magistrate or a judge. If you are unhappy with a decision, you may wish to talk to a lawyer to get independent legal advice about whether you can appeal to another court.

What happens after the Commission receives your complaint?

Once the Commission has received and considered a complaint, it will take one of three actions:

The Commission will advise the outcome of any complaint in writing.

A Guide to Judicial Conduct is published on the Australian Institute of Judicial Administration website(publication no. 82)

Children's Court complaints in relation to the conduct of court staff, services provided, court processes or procedures, or court facilities must be made in writing and forwarded to: